Police Captain Shoots Himself in the Head in Front of Ex-Girlfriend!! [VIDEO] 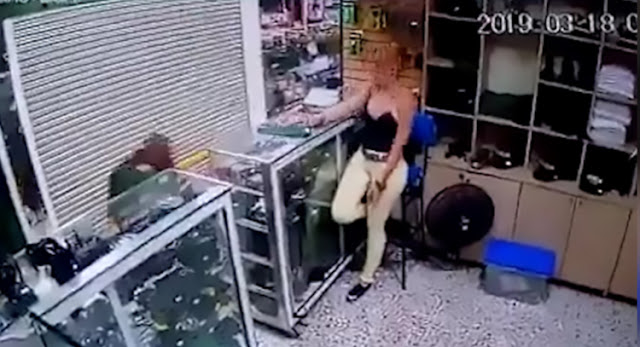 
The incident took place in the city of Medellin in the north-western Colombian department of Antioquia when the police captain and head of the Special Security Operation Group, identified as Edilberto Ortiz Correa, went to visit his ex-girlfriend in the shop where she worked.
In the shop’s CCTV footage, the uniformed officer is seen talking to a woman behind the counter.

The 32-year-old cop then takes out a gun and shoots himself in the head without hesitation.
Ortiz Correa falls to the floor and his bloodied head is seen resting against the shop’s shutters.
Meanwhile, his ex-girlfriend looks on in shock before taking out her phone.
The police captain was rushed to a nearby clinic where he was pronounced dead nine hours later.
Clinic director Juan Carlos Aguirre said: “He was sent to the intensive care unit where he finally died at around 2.30am.”
Metropolitan police spokesman Eliecer Camacho said that the officer’s death was “suicide, apparently over a personal reason”.
Marcadores: deadly shooting , police , shooting , video