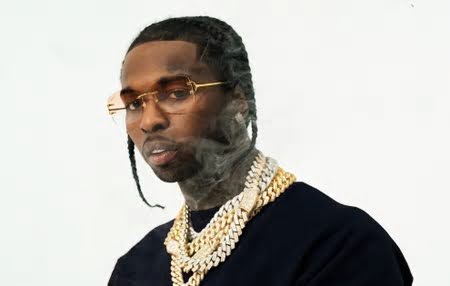 First and Foremost we would like to say RIP Pop Smoke. We Send our condolences to his family  and loved ones for their loss.

Rapper Pop Smoke was a rising Brooklyn, NY rap star known for his break-out single "Welcome To The Party" which debuted in May of 2019 to millions of youtube views and amassed a huge following in his native city of New York.

On Wednesday Morning 2/19/20 it was reported that the rapper was gunned down in an apparent hone invasion in a Hollywood Hills, CA home. Since his murder the internet has been going crazy with rumors of revenge killings and inside jobs done by his "woos" back in Brooklyn.

The prevalent rumor has been that his best-friend/brother Mike Dee may have been responsible for the rappers death. Reports are that he was with the rapper, born Bashar Barakah Jackson, for his entire LA trip and has since displayed some strange actions since the murder. 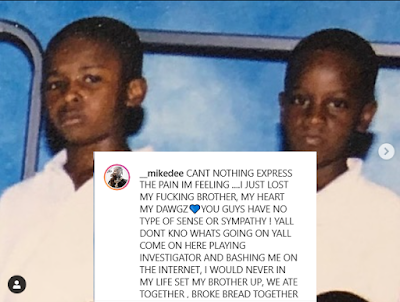 Our sources say Mike Dee may know more than he is telling at this point but was not involved in the death of his brother.  His strange behavior is either just a coincidence or a person in shock. Our sources say the biggest clue to what happened to Pop Smoke may come from the video he posted to social media just one day ago where he is showing off gifts he received when he touched down in LA. In the video Pop accidentally shows the address of the home where he is staying. Sources believe this is where the ball gets rolling. 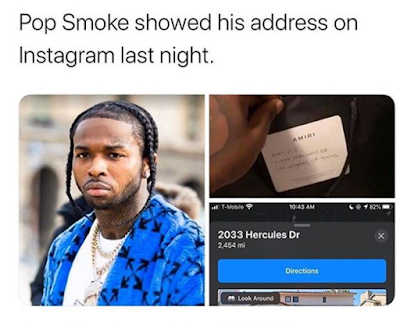 This is where the story get murky. Rumors are that a group of well known Crips got wind of the New York rapper in Los Angeles soon as he landed. They were actively watching all of his social media looking for an opportunity to pull up due to the rapper "not checking in". The video slip up was what they had been waiting for.

Our source, who is from California, says that it is common for this certain group to run up on unsuspecting rappers with plans of extortion. They often get money or promises of future business with artists. In this case, Pop Smoke may have not been as willing to do business with the men after they burst in the home he was staying in with weapons. What is known is that only they were armed and a shooting took place. All of the men were able to flee the scene and have since gone into hiding.

[UPDATE] There was also a party at the rappers Hollywood Hills home prior to the home invasion, which may have given the group of men easier access to the property. The alarm has been turned off and all of the partiers had just left the home prior to the break in. 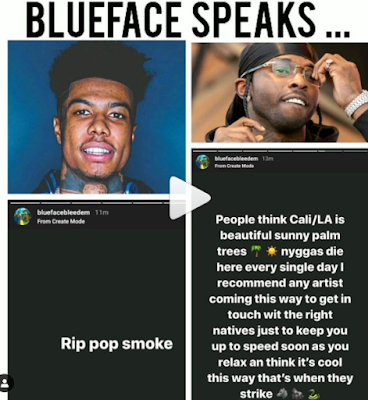 This rumors was sort of backed up when fellow Los Angeles Crip rapper Blueface commented on the tragedy on his Instagram. Sources say that Blueface and his associates were NOT involved but word on the street travels quickly and the rapper may have been looking for clout when he basically gave away the motive for the murder.

Again this is ALL RUMORS at this point. There are some people really hurt by this event and wanted to get what is supposedly the real story out there, as well as clear Mike Dee from suspicion.