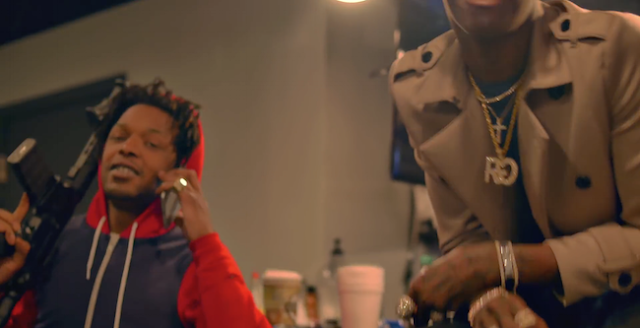 (from Smoking Section)
Just when it looked like the Lil Wayne-Young Thug-Birdman beef was cooling down, things have ratcheted right back up. Days after Birdman allegedly tossed a drink at Weezy during a performance, he’s implicated along with Young Thug in the indictment for the Lil Wayne tour bus shooting in Atlanta back in April.
According to WSB-TV’s Mike Petchenik, the indictment alleges that Thug and Birdman were involved in the conspiracy to kill Wayne, and that the accused shooter, Jimmy Carlton Winfrey, was simply carrying out Thug’s threat to murder him.

Here’s Winfrey in the aforementioned “Halftime” video next to Thugger with rifle in hand.

This of course all comes just after Thug was arrested for allegedly threatening to kill a mall security officer.
What was once a funny and seemingly petty rap beef has suddenly become something much more sinister and dangerous. As Petchenik notes, Birdman and Young Thug have yet to be charged with anything, but the allegations are serious and seemingly could result in charges and jail time eventually. The innuendo was there when Wayne’s bus was shot at in Thug’s hometown, and it got worse when it was revealed that Thug and Winfrey had ties to each other. Now it’s an outright accusation that Thugger and Birdman apparently plotted to kill their rival/idol Wayne. Who knows where it goes to from here.
UPDATE: We’ve located the indictment, which details the entire timeline of the Lil Wayne’s tour bus shooting and Winfrey’s connection to Thug and Birdman. Check out full details of the indictment here.
STREET CERTIFIED
Marcadores: beef , birdman , lil wayne , young thug