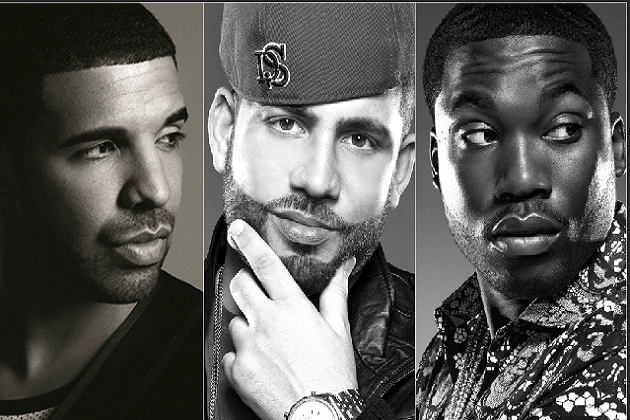 DJ Drama's now girlfriend and ex-wife went on twitter yesterday to debate something we basically already know. Drama's ex-wife for over a year claims that Drama confided in her about leaking Quentin Miller's now infamous reference track for Drake's hit 10 Bandz. His now girlfriend decided she would hold her man down and debate back and forth with his ex via twitter....smh.

Not That we are  over looking what these lovely ladies have to say but....yeah. Here's the real deal. Drama been feeling some type of way about the whole Drake running the game movement for a while now. IDK if Drama and Drake had beef but, what we do know is that every major artists in the game today has at least one Gangsta Grillz mixtape, except Drake. We do have to also add that since Drake's first mixtape he has been on an album streak so its not like he's been fucking with any other dj's.

This may be the problem. Drama felt that Drake running the game would be bad for dj's cause Drake don't really fuck with that part of the rap game. Drake doesn't do interviews or mixtapes. He's turning the rap game into the R&B game. Also Drama has a lot of history with Meek Mill and the city of Philadelphia. He started his career there.

So obviously in an attempt to shake up things at the top of the rap charts he decided to throw a lob pass to Meek Mill. It was supposed to be an easy victory for Meek, Drama, and the DJ's.

We all know it didn't work that way, and now Drama is pissed. He basically made his big power move and Meek didn't really follow through. Now this leaves Drama and the DJ's behind him in an even worse position than they were in before the beef started.


It's due on 1st. Also I'm guessing you don't want to talk about going to counseling to get back together? @djdrama I can show that email too


Or maybe we should talk about how you couldn't do a lump sum payment because you are broke? @djdrama because I would've rather that 😘


Or how you told me that you gave Meek Drake's reference tracks to make him feel better about Quinten not wanting to work with him? @djdrama


@summerwalker you can't contact him any other way besides social media cause he blocked your annoying ass! Stop biting the hand that feeds u


@SUMMERWALKER @DJDRAMA you went there first putting your private business on social media, you left him no choice but to respond


@summerwalker you've been blocked for contacting him since last year! No one told you about reference tracks that's why ur tweeting him lol