LHHATL Star Tommie Lee Forced Out Of Car And Arrested While Pregnant!! [Video] 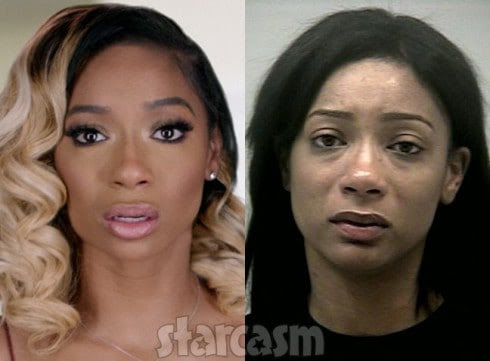 This arrest was assumingly for a DUI.....this is additional info on Tommie I picked up while researching the arrest.

(from starcasm) According to their source, Atasha Jefferson–who is only an alleged alias for Tommie–”use[d] to work for Karen doing identity fraud,” and is “wanted right now in Minnesota” on forgery charges. Atasha apparently underwent plastic surgery in Miami, and paid for it with money stolen through the scams, but “the doctor who did it…also pressed charges against her for stealing.”

Again: we can’t confirm that Atasha Jefferson and LHHATL‘s Tommie are indeed the same person. What we do know, however, is that some of the claims the tipster made regarding Atasha Jefferson appear to be at least partially true. Atasha C. Jefferson–who in turn goes by the alias Atasha Chizzaah Moore–was booked into the DeKalb County (GA) Jail on May 2nd, 2013, on one first degree felony charge. Jefferson posted a $3,500 bail and was released four days later. Before that, the Atasha Jefferson arrest records include an appearance in court in Gwinnett County Court (also in Georgia) back in 2010.

In that instance, Jefferson faced three charges: one count of “Giving False Name, Address, Or Birthdate” on June 19th of that year; one count of driving while her license was suspended, on the same day; and one count of driving while her registration was suspended, also on the same day. Jefferson received twelve months’ probation on the first charge; she received verdicts of “Nolle Prosequi” on the latter two charges, though the reason why isn’t immediately clear from the court record.

Atasha Jefferson’s arrest records are longest in Fulton County, which includes most of the city of Atlanta, and Clayton County, slightly north of the city. She was arrested nine times in Fulton between 2006 and 2014, on a variety of different charges: three different counts of battery (one of which involves–for real–a bus hijacking); five counts of shoplifting; and, most recently, of the more general “Theft of Service.” As far as Clayton goes, Jefferson went to court on thirteen different charges there, several of which, again in 2010, involved forgery.